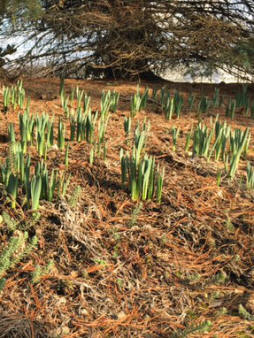 The unusually warm, wet weather while not enough to bring trees and shrubs to life because of their cold requirements, it has caused a small push to the thousands of daffodils and narcissus planted around the nursery as well as some hosta in Wolf Creek Gardens to the north.

In the winter storage huts, while plants are still dormant because of the cool and sometime cold nights plus short days and low light levels, root systems in the containers are growing! In the 2006- 2007 winter, temperatures were eerily warm until January 27, 2007 when 40 mph winds swept in with a cold front and dropped temperatures to -4º F. Early the next spring, much damage to the plants occurred in storage by evidence of the root system. The once tender growing roots in many cases were killed by the sudden shock of extreme cold. That year was like deja vu when in 1992 temperatures were abnormally warm in February only to drop suddenly March 1st for several days again causing plant damage on the outside. While widely fluctuating temperatures in winter are a nightmare for the orchardists, gardeners, farmers and nurserymen, there is nothing that can be done about it.

On another note of interest, the folks at Wolf Creek Winery about 1 mile north of the nursery have spotted a pair of Bald Eagles hanging out along the shore of the Barberton Reservoir. How strange to have such birds of prey as the eagle around when not too many years ago it was pushed to the brink of extinction by the ravage of the pesticide DDT and relentless hunting! With the passing of the Endangered Species Act by Congress in 1973 which protected the birds as well as other endangered species, the eagle began to recover very slowly. Then too, Congress outlawed the use of DDT that same year resulting in more chicks hatching from the formerly too fragile eggs of the birds. Hopefully the eagles will thrive and multiply around the reservoir but as their numbers grow, anyone with chickens will soon get wise as to what the birds do best – eat.