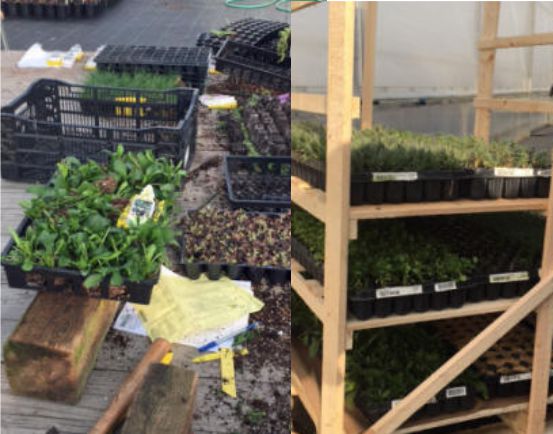 The weather has been to say the least, enjoyable although it’s not typical for the end of February. Last week, the bud scales on the lilacs in the storage huts are already falling off which is definitely a sign of the plants wanting to push out growth. All the storage huts for a variety of trees, shrubs and perennials are well ventilated including the provision of roll up sides to keep the houses even cooler with the warm weather. Unfortunately, growth will “push” to early anyway that is for sure to cause problems later on when a sure-to-come hard freeze will occur later on. Even outside, daffodils are popping up everywhere soon to be followed by trees and shrubs starting to “wake up” as their cold requirements have been achieved for the breaking of dormancy. The warm weather too is a wake up call to perennial weeds such as henbit and the troublesome hairy buttercress as it grows quickly and then blooms with its tiny white flowers that will soon fade to be followed by countless seeds to pop up again everywhere!

At the nursery, planting of annual flowers is proceeding at a feverish pace with now the arrival of perennial flowers from Michigan that must be handled quickly as they will not keep well in their small cells if not transplanted soon to larger pots. In addition, bare-root roses have arrived from California and they too will not keep long in their shipping boxes as they will be subject to destructive mold should they remain only a few days sealed up.

Now the clematis vines potted last summer are showing a little growth which means they must be quickly pulled from winter storage, trimmed, fertilized, spaced and weeded before they become tangled in a mass of early growth of the twining vines.

It’s only the beginning of the wild side of spring. In June, we’ll reflect on spring and think how did it pass so fast!