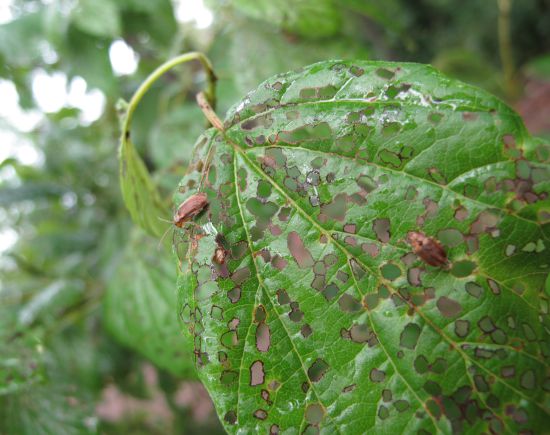 Now that the dog days of summer have arrived, the typical dryness of August appears. Some of the heavy rain for many areas earlier in the month of July seemed to miss this area when a one to two inch rainfall would have been helpful.

With the somewhat warm temperatures (although cooler than last year) the “bugs” are on the march and customers have come in with problems in the landscape concerning azalea lacebug, bagworms, rust disease on serviceberry and bacterial blight on lilacs. The bagworm and azalea lacebug treatments though are easy with 2 sprays of a product containing the active ingredient acephate with one trade name being Bonide Systemic Insect Spray. Each of the 2 sprays are applied at a one week interval and will at least temporarily stop the damage. While the bagworm is difficult to kill in the late stage, the pesticide will stop them from feeding so that to finish them off, an application of BT or Bacillus thuringiensis in early May will spell doom for any new hatchlings. BT, also known as thuricide is a naturally occurring bacteria that is deadly to the Lepidoptera family and works great for cabbage worms, leaf eating caterpillars and Gypsy moth larva when a strain called Kurstaki is employed. As far as azalea lacebug, the two acephate containing sprays will kill the adult and nymph stages and the second generation as it hatches from the unaffected eggs.

This Monday will be “exciting” as we will do a physical count to correct our online inventory so that we might more accurately know what is available. With at least 5 persons starting at 7 a.m., the physical count in the sales area should be finished by 9 a.m. and then entered into the computer by the end of the day.

Truth be told, I would rather pull weeds all day!