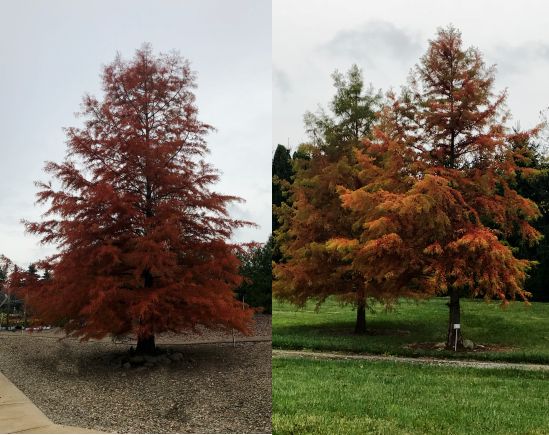 While the last of the leaves are almost off the trees, flowering pears, dawn redwoods and bald cypress are stubborn about giving up their foliage. The burnt orange of the Dawn Redwood and Bald Cypress have a beautiful amber hue about them when the sun illuminates the tree.

Flowering pears in addition to having brittle, easily broken branches are even more susceptible to severe damage from an early snow caught by the still hanging leaves.

Grave blanket construction continues along with preparation of preparing for next spring with on going repairs, clean up, trimming and so on. After covering of the overwintering houses, spring bulb planting will go on into full swing with the planting of at least 6 thousand tulip and 1000 narcissus.  The tulips are divided into two groups for an extended bloom time.  The Darwin hybrids normally bloom about April 20th through at least May 1st while the late blooming type called Single Late will come into its own about May 1st through Mother’s Day.  The result is weeks of spectacular bloom in which annual flowers from the greenhouse will take the place of these May bloomers around Memorial Day and after.

Another project going on is the installation of steps down the steep slope to the Wolf Creek Botanical Garden.  For older and even younger customers, the slope from the Owl Barn to the garden has been difficult to navigate and the result has been a limited number of visitors to the lower garden and rhododendron-azalea garden in the shade of trees on the eastern portion of the garden.

Then with fall comes time to take rhododendron cuttings and sow azalea seed from the native azalea known as Rhododendron calendulaceum.  This deciduous azalea is native to the Appalachian Mountains from Pennsylvania to northern Georgia.  When the pioneers moving westward through the Cumberland Gap when the azalea were in bloom in spring, the brilliant hues of orange, yellow, melon with some orange-red shades lit up the mountains as if they were on fire.  Already some of these young azaleas are growing at the nursery to be available for sales in the spring of 2019.  Another exciting development is obtaining cuttings from Rhododendron ‘Summer Glow’ with the help of Dr. Steve Krebs from the Holden Arboretum.   These cuttings will be sent to a nursery south of Portland, Oregon to be rooted this fall and then produced by tissue culture in a lab that can increase the number of plants quickly.  This true pink June blooming variety has almost disappeared from the nursery trade but soon will be available if all goes as planned.  Holden Arboretum has a fantastic collection of Rhododendron especially with the gift of the famous rhododendron hybridizer David Leach, who upon his death in 1998 bequeathed his land and entire collection in Madison, Ohio to the arboretum.

Things are changing fast at the nursery as we strive to keep things fresh and interesting every year.