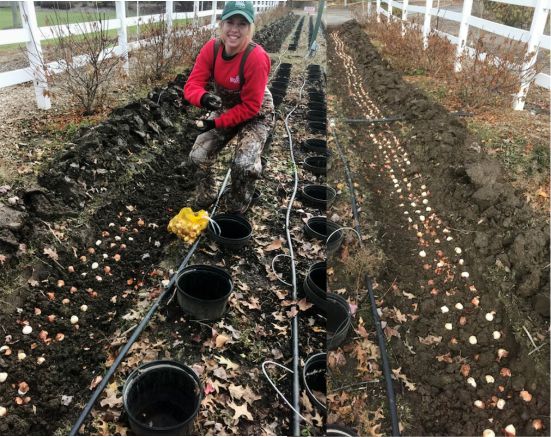 As the holiday season fast approaches, the closing up for winter on the tree and shrub side is nearly done as the last of the stock has been put away and the overwintering houses have received their batten strips which are strong plastic lengths of poly ethylene tubing that help to secure the white poly film on the houses in case of a sudden severe wind as was the case last April and especially on January 30th of 2008 as 65 mile per hour winds tore through the nursery with limited damage resulting from this 3 hour gust.

Poinsettias have to be moved quickly during a short window of near 50º F as they traversed the back growing greenhouse to the greenhouse attached to the store. Then the construction of grave decorations with customizing them to fill the various orders according to customer wishes as to the color of ribbon and other decorations is progressing nicely.

On the grounds, work is still being accomplished on the spring flower bulb project as 6,000 tulips have been finished along with some additions to the Wolf Creek botanical garden.

If that weren’t enough, cut Fraser Fir from southern Ohio arrive early next week to be sorted, unbaled and then priced for sale right after Thanksgiving. These Ohio-grown trees while more expensive than Fraser Fir from North Carolina are ever so much more fresher as the small family farm cuts them later as they are not under the burden of getting out several thousand trees with limited labor.

This weekend porch pots full of conifer branches and pine cones will be under construction as the rush continues toward the holiday season. This Thanksgiving is always a good time to follow grandma’s advice which is to “count your blessings” not only on Thanksgiving but everyday.