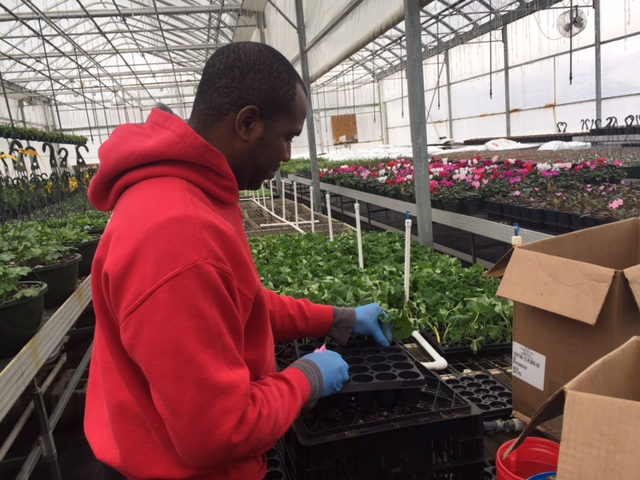 The extreme warm up after sub zero temperatures has allowed us to ventilate the plant storage huts, do spot watering and apply another round of fungicide. Ventilation during periods of a thaw is key to keeping the deadly gray mold called Boytrytis from rotting the plant’s live tissue in the storage huts.

Work is proceeding well in the greenhouse as far as planting is concerned and another sticking of imported flower cuttings and another round of geranium cuttings. By February 1st, we must open another bay of the greenhouse as the first bay will be nearly full to capacity with no where to go.

Another project for winter is to test the capacity of the water well on the property to explore the possibility of a variable speed pump. This pump would deliver more water from the well at peak times when two or more persons are hand watering in the greenhouse. The capacity of the well that was drilled originally is approximately 25 gallons per minute although the current pump allows less than 10 gallons per minute through the system. If the water is found available to pump up to 25 gallons per minute for about 1 hour through the system, the problems of low pressure and volume during periods of heavy demand would be solved.

The arduous work of finding high resolution photos for our new online catalog has begun. In addition to finding the photos is attaining a written permission to reprint the photos to avoid fees from the owner for unauthorized use. No less than 200 new photos are needed to complete the catalog along with our already extensive library of thousands.

January is passing by quickly….