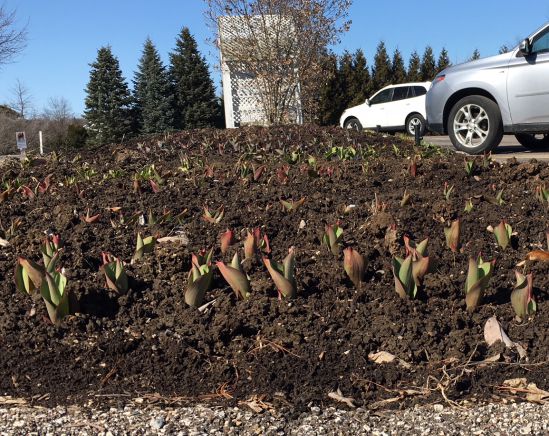 Now that we’ve entered the spring season signaled by the vernal equinox, the weather will be gradually becoming warmer and the longer days needed by plants will soon result in the swelling of buds followed by leaves and then in some cases flowers. Already with Palm Sunday upon us, the greenhouse has come alive with al the Easter flowers on display for the early season.

Now on the outside, the thousands of tulips planted last fall are popping up everywhere although they are much smaller than last year at this time due to cool days and cold nights of March.

Next week some of the stock in the overwintering huts will be coming outside although some items will remain in storage until the first or second week of April. Shipments too of nursery stock will arrive the second week of April with the finish of Canadian Hemlock the week of April 22nd. Canadian hemlocks like fragrant viburnums and dogwoods seem to grow and thrive better when they are dug just before they are ready to grow. Sometimes when dug too early in spring, they seem to strain to put on a vigorous flush of new growth.

This season the more than 1000 creeping phlox seem to be just “waking up” as compared to last year that saw the plants vigorously growing and even budding. Now that the perennial potting will be at an end for this spring, the first week of April the dreaded job of cleaning dead foliage and spraying the hosta in storage remains. With no easy way to accomplish the hosta task, many hours of lifting, carrying and spacing of the plants will result to satisfy the needs of the plants. So much attention and work are devoted to some of the stock that it’s comparable to taking care of an infant.

With others, the mantra is “If they can’t take it, they don’t deserve to live.”