Lots of Bloom at the Nursery! 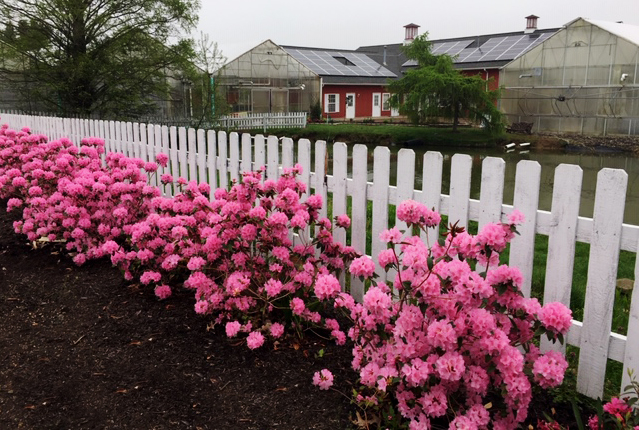 While the warmer days of May have arrived, the rain continues with a few days of sun in between. The creeping phlox in the Wolf Creek botanical garden is finally blooming in its shades of pinks and blues as it spills over the rock wall down below from the Owl Barn. The single late tulips have come into bloom as the patches of pastel colored Darwin types fade away.

In the garden, Rhododendron Aglo and the huge Azalea Etheywyn are ablaze in a bright pink display while other azaleas such as Herbert, Stewartstonian, Boudoir, Cascade and Elsie Lee will put on their show soon of reds, whites, purples and pinks making the wooded knoll on the garden look as though it is on fire from a distance.

The greenhouse is nearly at its peak for inventory as we continue to stuff it full of flowers and tropical plants from Florida that will even give the shopper more selection and sometimes confusion as to what to choose with so many choices. Then too, more perennials from one rear production are becoming available as we struggle to keep that portion of the nursery well stocked!

Finally, the tea roses and climbers have become alive to be moved outside as they were not ready before as they had to be well-rooted in from their late February potting to be sold. The drift roses too are absolutely gorgeous this year with glossy, healthy radiant foliage as later they will burst into a riot of color.

As always, so much to do and so little time!