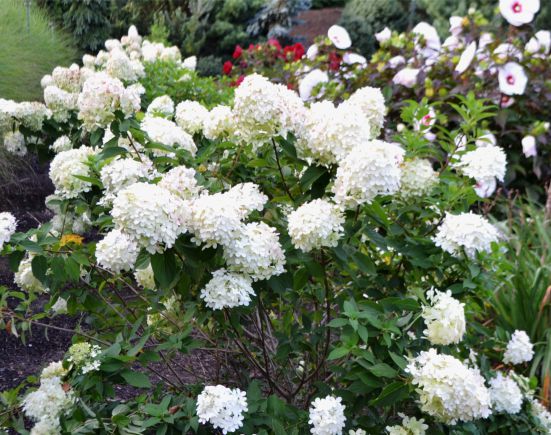 The clematis that we had potted 2 weeks ago are starting to take off and grow and soon may be a tangled mess that we must cut apart even though the plants are at a spacing of one foot on center. The hydrangeas planted on the nursery property are blooming profusely including the giant Limelight in the lower garden that form a back drop for lower herbaceous perennials. The Vanilla Strawberry Hydrangeas are just now getting their strawberry blush on the previously all white blossoms that almost make the plants appear overloaded with flowers!

Most transplanting of herbaceous perennials will be nearly accomplished by the first of September although a few are not available much later even into November.

After a short absence of Seiberling sweet corn in the market, it is now back and should not run out until sometime after labor Day as the successive fields of sweet corn at the farm look much better for a bountiful harvest.

Another project at the nursery is the excavation of the reed grass in the lower garden drainage ditch called Phragmites. While a species of Phragmites is native to North America, a European species called Phragmites australis is able to out compete the native species and is so vigorous can even replace native species such as wild rice, cattails and wetland orchids. The grass produces dense thickets that are insurmountable for native fauna and for its eradication, 2-3 burns over 2-3 seasons may be needed. Digging it out and heaping it up in a pile we hope will do the trick.