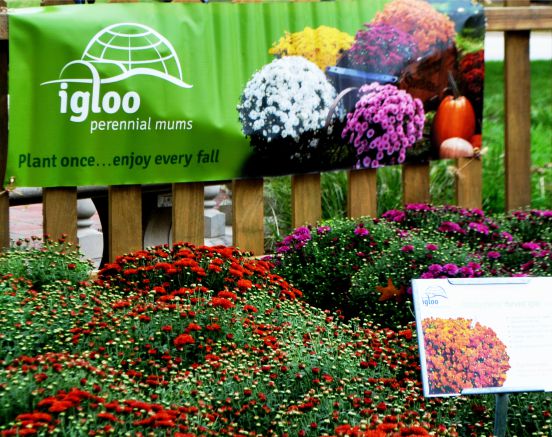 As the Blueberry Bash advances towards the July 24th day (see details below), much preparation is in the works already. Fortunately, we were able to fill most of our usual entertainment venues with the usual fares even at a late date.

The Fall Festival will follow in September, a week before the Barberton Mum Fest that this year should be in full force especially after Lisa McLean, director of the fest since 1991 had been putting money away every year for a weekend that would rain. That year was the pandemic of 2021.

Igloo mums are available in a trade one and half gallon in many varieties and are quite popular as they regrow year after year. While called chrysanthemums these Dendranthemums are actually quite more winter hardy than the common chrysanthemum morifolium that is more tender.

Now at the nursery is the time for cleanup of weeds, trash, greenhouses and other preparation for next year’s production. Clematis and creeping phlox are next on the schedule with additional perennials such as bareroot hostas and daylilies. Next we will be potting up small “plugs” of a wide variety of perennials that will be sold in late September and then to be overwintered until the next spring.

The Dayton Dollars have gone out as they are the result of five percent of all purchases in spring (above $100) until the end of June and may be spent on any number of items except fresh produce and will expire on about one day before Labor Day weekend.

This Saturday join us on Ready, Set, Grow as Chuck Seiberling of the Seiberling Farm of Norton talks about the new truck farm that for over a hundred and fifty years was a Dairy farm. Tune into 1590 WAKR or 93.5 AM. to get Chuck’s perceptive on growing produce. The full program starts shortly after 8 a.m. every Saturday morning.

Well that’s it for now.