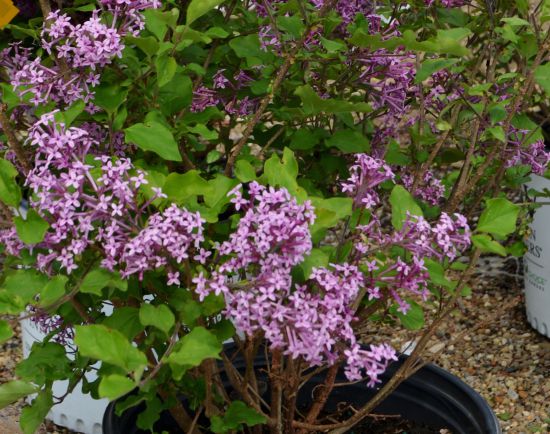 While the weather department still behaves like a roller coaster, the extended periods of warmth are mimicking last year’s relatively warm winter. With some exposed vegetation from the lighter than normal snowfall, deer browsing at the nursery is less than it had been in the two recent previous cold winters of 2013-2014 and 2014-2015. In Wolf Creek Botanical Garden, the deer repellent called Deer Stopper was applied to many of the shrubs susceptible to deer such as the evergreen azaleas and rhododendron about Thanksgiving. During a thaw in late January, the repellent was applied again as the deer had found their favorite azalea called ‘Herbert’ which ironically is a dark double purple that is quite winter hardy and easy to grow except in the case of deer. It seems the animals prefer the flower buds of this variety even though Herbert is surrounded by Azalea Boudoir, Stewartstonian, Cascade and Elsie Lee which are deer damage free! Who would have thought that deer would be picky about what variety of plant suits their taste within a species!

Part of next week is filled with safety seminars, a Drug Free Workplace seminar and one on the new expansive regulations rolled out by E.P.A. on January 2, 2017, which is aimed at protecting workers and applicators from exposure to pesticides that are sprayed in greenhouses and on the grounds. This update of the WPS 1992 Standards although somewhat cumbersome, is designed to protect workers and prevent pesticide poisonings in the work place.

Tomorrow I will be giving a seminar entitled “Lovely Lilacs” that will not only give the “dos and don’ts” when planting and caring for this genus and reviewing the various hybrid groups and varieties within those groups. Recently, Father Fiala near Medina, Ohio was known for his breeding and selection of many varieties. Sadly after the priest’s death, the property was sold and divided up into housing lots due to the zoning violations having to do with all the traffic resulting from all the activities having to do with his lilac display.

As always, join us for this informative seminar beginning at 11 a.m. this Saturday. See you at the seminar.