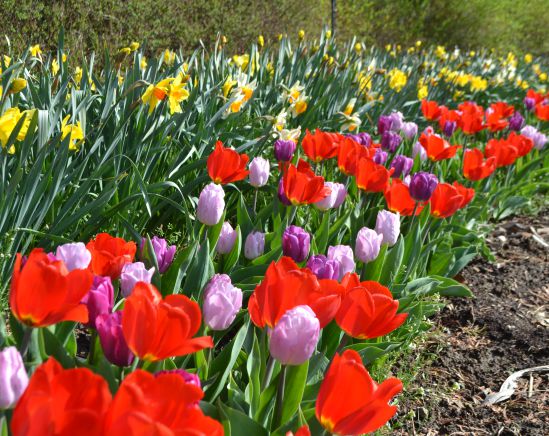 The second half of April at the nursery is an even faster ramp up of activities as the perennial house and annual flower houses must be readied for opening at the end of the month. Then too is the receipt of tropical plants from Florida that require almost everyday watering plus the at least 2 initial successive treatments to eliminate or at least check the “Florida bugs” so that they are not present on the plants when they are purchased and to eliminate the possibility that they will contaminate the flowers and vegetable plants grown in the greenhouses over the winter.

For other business, the receipt and then potting of thousands of small shrubs from Michigan must be accomplished so that stock will be available later in the summer and next year. Some of the small shrubs will be continually repotted into bigger containers in order to achieve larger finished sizes which might extend over a 3 year period!

Growth of plants in the annual flower house is amazing as the warm, much longer sunny days of the winter. Some shipments of small flower “plugs” (as they are called) were delayed by the grower from which we purchase many of the patented flowers so that it looked as though the pots and hanging baskets would be delayed which now is not the case with the favorable weather. Fortunately rain has been adequate as the outside stock has to be irrigated almost everyday with water that is both recycled and the result of rainfall runoff from the nursery property.

The thousands of tulips for May bloom may come early as a late April bloom due to the warm push of weather this spring. While not quite the Keukenhof Gardens in Holland, they still make quite a show as these bloomers “show off their skills.”