Time for the Roses 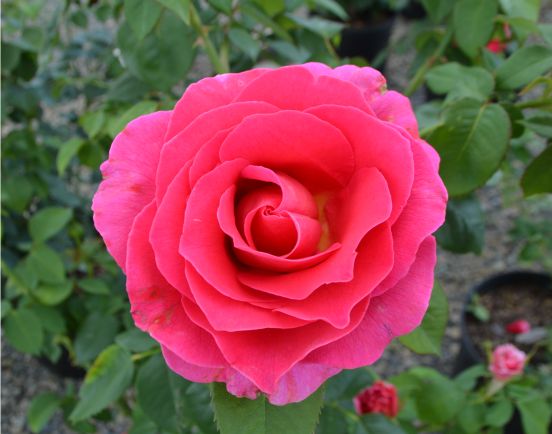 Contrary to last year, there is certainly no shortage of rain this spring. Many customers coming into the nursery have been more aware of wet areas in the yard and are wanting ideas for plantings which might include the Buttonbush (Cephalanthus), Calycanthus (Carolina Allspice), Winterberry (Ilex verticilata), Variegated Dogwood (Cornus elegantisima or stolonifera), Variegated Willow (Salix integra ‘Nashiki’) or even elderberries (Sambucus canadensis). For trees in wet areas River Birch (Betula nigra), Silver Maple (Acer saccharum) or Bald Cypress (Taxodium distichum) would work well.

Finally, many of the roses are coming into bud and bloom which will create a spectacular show especially for the final week of May! Tea roses and floribundas must be sprayed weekly with a fungicide such as Bi-Carb to keep mildew and black spot at bay as soon after inoculation by these fungus organisms, the leaves will yellow and drop off which then will slow down growth and the resulting bloom.

With Memorial Day approaching, many folks will decorate the graves of loved ones in cemeteries as a sign of respect and memory of those who have passed before us. The traditional Memorial Day was called Decoration Day and designated to be May 30th by the federal government to consolidate the date into one celebration after the multiple celebrations on different dates throughout the various regions of the country. With so many war dead from most families resulting from the Civil War it was only natural that families would want to decorate the graves of those lost.

At the nursery, plantings of flowers will not go on until after the holiday weekend due to the busy time. The greenhouse is at its peak with masses of color everywhere. The mixed confetti hanging baskets that were a little small are now particularly beautiful as at least 25 different combinations are available. Confetti is a trademark name of the Dummen Orange Company that produces the “plugs” for the combination.

A little more sun and warmth now would be good for the garden but now we’ll have to wait and see. Que sera sera.