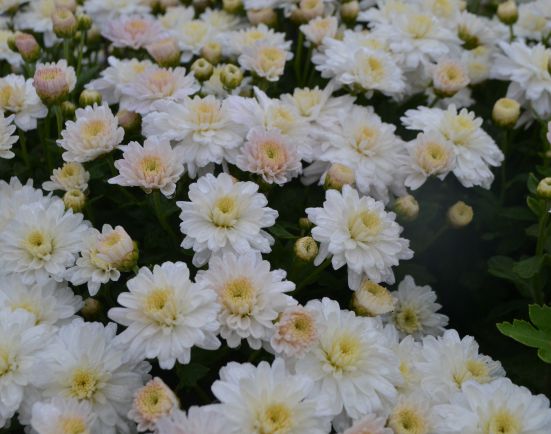 Last Friday in the late morning, the nursery received just over one-half inch of rain that gave some relief from the dry weather. Some of the nursery stock such as the tree hydrangeas must be watered by hand every few days as the dense canopy of foliage prevents adequate watering of the root system by the overhead irrigation system. Other stock such as the recently potted perennials must be watered only every 3-4 days as too wet an environment will cause roots to rot and especially so since we added the product haydite to our mix to hold more moisture while giving aeration to the roots as the plants utilize the water contained within the expanded shale.

It’s just about time for Chrysanthemums as there seems to be no heat delay in the flowering as it was in the hot summer of 2016. In fact, during a conversation with Bill Aulenbach who is a member of the Mum Fest committee in Barberton, Bill related that some varieties of Chrysanthemums may not “make size” as the flower buds are forming earlier than normal due to the cool weather. Flower buds retard growth so that even in a greenhouse full of flowering annuals in February and March the growth regulator called Florel is sprayed on many plants in order to abort flowering so that the plants are able to “make size” for later flowering in the month of May. The Igloo mums, which are really a Dendranthemum, are another matter in that they normally bloom earlier.

These exceedingly winter hardy plants are durable because of this fool proof hardiness and their sheer beauty. Igloo mums offered at the Mum Fest in Barberton are frequently on the “down side” of bloom as the festival is always the last weekend of September. Whatever the weather, the mum display around Lake Anna is enjoyed by all even though every year is a challenge to achieve a perfect display. As Bill has stated he can see all the imperfections of the display; however, to the general public made up of the tens of thousands of people who come to the Fest, the mum display is always spectacular!