Ready for the Holidays… 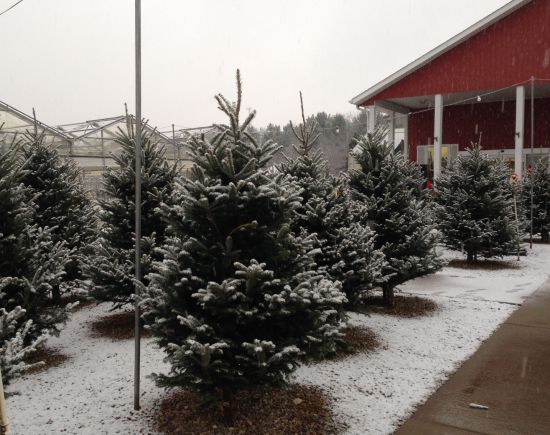 The year went by so fast as we get ready to enter the cold and dark of December.  The first week of December seems quite dark as the sun does set earlier than during the winter solstice about 3 weeks later.

Many deliveries of grave decorations have been already accomplished for those wanting the decorations placed before Thanksgiving.   Flower bulb plantings are finally done and over 100 mouse traps have been set to control the pesky mice in the overwintering houses that would gnaw on the roots and bark of the stock.

The rain last Saturday of at least 2 inches filled up the irrigation pond and most likely caught up the rainfall needed because of the prolonged late summer and fall droughts.

The cut trees from southern Ohio are ready to go and many beautiful porch pots have been constructed for the Christmas season.  These pots are light enough for almost anyone to carry and will stay fresh and green throughout the Christmas and New Year’s season.

Cuttings of rhododendrons have been stuck and will be rooted by January and ready for transplanting in the greenhouse.

Deer repellent has been sprayed on the foliage of the rhododendron to keep hungry deer from browsing on the plants as the deer population has noticeably increased over the past 2 years.  It will be applied again in late December and early February during a period of winter thaws so that the product will dry on the plant foliage.  Another “must” will be the foliage application of the emerging tulips in spring when the leaves grow two inches above the ground.

In Puritan, Massachusetts, it was forbidden to celebrate Christmas that fit with the Puritan mindset of austerity and control by the elders of the church.  Too bad the Puritans did not follow their beliefs of charity and forgiveness when they dealt harshly with the native people to clear the land for English settlement.  I guess they forgot about the part of “love thy neighbor as thyself.”

Time is running out for garden chores as winter approaches.  Now is the time to get going if outside chores remain.