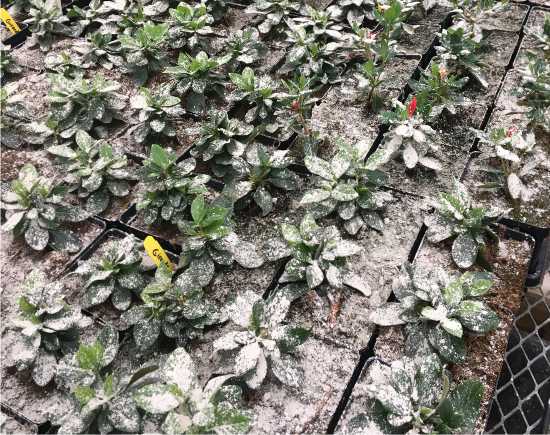 Outside chores at the nursery have stopped as the bitter cold continues.

The production greenhouse is now requiring lots of attention as the first application of nematodes for fungus gnat and thrip insects was applied last week.

While thrips can get out of control and destroy flowers and weaken plants later in spring, fungus gnats are more than a nuisance as their larvae can damage plant roots as they feed on the tender root tips.  These almost microscopic nematodes enter the thrip and fungus gnat larvae to inject them with their own fungus which propagates itself inside the bad bugs and kills them.

Once weekly, these beneficial critters are applied either through an electric sprayer or fertilizer injector so that the worms can go to work in the soil or foliage of the plants.

Transplanting of rooted cuttings of various types of flowers is now the norm so space can be cleared for the thousands more arriving next week and the week after.  A second cutting of geraniums will be taken to plant a second crop of hanging baskets and six inch pots for sale beginning in early May.  In addition to next week’s cuttings, three more batches of cuttings from the stock geraniums will be taken beginning the week of March 10th so that they are directly stuck into smaller 6 pack units to again be sold in May.

Once the weather breaks a little, there are still outside projects going on including the re-spraying of the rhododendron-azalea garden with deer repellent.  The garden was sprayed just before Thanksgiving with another spray due as we have seen tracks of hungry deer in the snow to reveal the deer checking out their next snack.

If only the temperature would rise above freezing for just a few hours!

Notice the photo of the young azaleas covered with lime as the acidic peat moss must be sweetened to bring the pH up to a respectable 4 to 4.5 so that the plants grow well until transplanting from the 4” pots to a 1 ½ gallon nursery container.

The lime also supplies much needed calcium and magnesium in addition to the pH adjustment.

With so much work to do at least there are not weeds to pull!