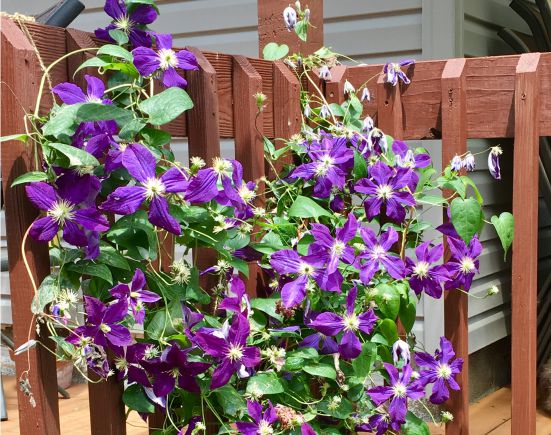 As the days grow longer and warmer, the rain keeps falling so that this year so far is not a repeat of the hot and dry June of 2016. The one and one half inch rainfall from last Saturday through Sunday was enough to replenish our water supply for irrigation for at least the next two weeks as the water is collected from almost all hard impervious surfaces from the nursery property.

While business for most of April was dismal because of the relentless cold, May and June have been better than expected although it remains to be seen if these months will make up for April.

Gardening is a pleasure in summer especially while temperatures don’t hover at 90º F or above and rainfall is not lacking to create a watering nightmare. Purple seems to be the theme around the nursery as the Clematis ‘Jackmanii’ (pictured) is blooming profusely now. For some reason this clematis from 1854 is still the most popular variety today even though now so many other colors are available. The spent bloom of the now gray Allium giganteum in the landscape has seemingly received a new lease on life as we have sprayed these spent blossoms a bright purple somewhat close to their actual color.

The pleasures of gardening have been summed up well by Thomas Jefferson’s letter to a friend on August 20, 1811 as reprinted here below:

“I have often thought that if heaven had given me choice of my position and calling, it should have been on a rich spot of earth, well watered, and near a good market for the productions of the garden. No occupation is so delightful to me as the culture of the earth, and no culture comparable to that of the garden. Such a variety of subjects, some one always coming to perfection, the failure of one thing repaired by the success of another, and instead of one harvest a continued one through the year. Under a total want of demand except for our family table, I am still devoted to the garden. But though an old man, I am but a young gardener.”

Then too, our radio show tomorrow (Saturday) will go on the road to Lehman’s Hardware in Kidron, Ohio in the heart of Amish Country where the subject will not only be on gardening but experiencing life’s pleasures by being in the moment as we garden, can vegetables, cook and otherwise make things at home. You can listen to the interview with Glenda Lehman-Erwin this Saturday from 8-10 a.m. at WAKR 1590 a.m.