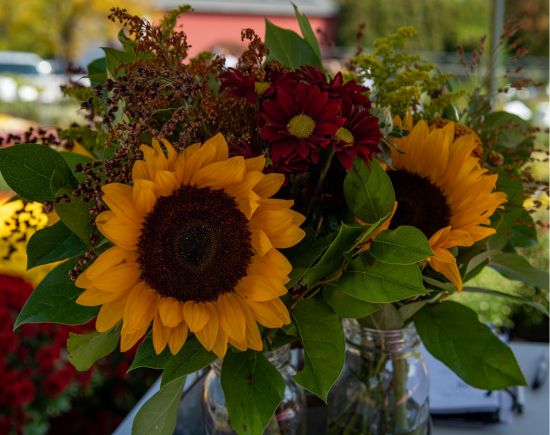 There isn’t too much gardening going on in February except maybe applying the last application of deer repellent on susceptible plants, taking a soil test sample if the ground is not frozen, quickly planting any spring bulbs left over in the garage if not done and sowing some grass seed to thicken the lawn up as long as there is no snow on the ground and the ground is frozen.

Whew, now that that’s done, the seminar Saturday is given by Jacqueline Kowalski of the Summit County Master Gardeners. With Jacqueline’s experience she will reveal a host of flowers that will make beautiful bouquets to decorate your table just like Martha Stewart would do.

One day I was talking to Gied Stroombeck of Roemer Nursery in Madison, Ohio about his childhood days in the Netherlands. He related to me how rough things were just as they were here in the United States in the Great Depression of the 1930’s. One thing though that did surprise me was the fact that his mother insisted that a fresh bouquet of flowers would be on the table everyday! Most likely, it was a way to brighten and cheer things up in the most dismal of economic times.

While at the nursery we do have flowers suitable for cuttings with which to make bouquets but our selection could be much much wider. The reasons are varied but some of the annuals and perennials that we could sell get quite tall in the container and can get floppy even with staking. Customers in general are more attracted to the mounding look and frequently will ignore perennials that would make a beautiful background for small and mid-sized ones. Many of the taller plants are late blooming and so will extend the season of bouquet making while shorter ones frequently don’t have long enough stems to place in a vase and in addition are out of bloom by late spring and summer.

A similar situation exists with roses as teas that are great for cutting with their long stems as some of the flowers are up to 5 feet on those tall growing roses. Then there are the shrub roses and floribundas with stems usually much shorter. Flowers appear sporadically on the shrub and floribundas and while beautiful and much easier to care for as compared to the tea roses, the exceptional quality and practibility of the long stems just are not there.

I am interested in just how long that Jacqueline can keep the fresh bouquets coming. Join us on Saturday at 11 a.m. for this growing cut flowers seminar.