Rhododendrons Are In Their Glory! 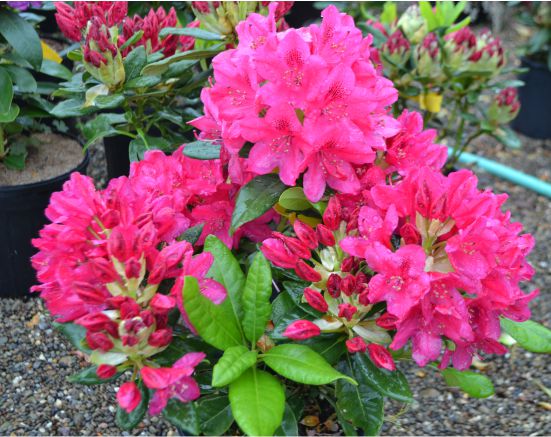 The botanical garden finally got a weed spraying as the catawbiense varieties of rhododendron as in their full glory such as catawbeinse ‘Alba’ and ‘Boursault’, ‘Nova Zembla’, ‘Ice Cube’ and ‘Boule de Neige’ just as the evergreen azaleas fade.

Following will be the huge display of the maximum types of rhododendron that will start blooming in mid June into early July.

Finally much trimming and other weeding has been finished and now a new order of perennials from Walters Gardens including mostly hostas and grasses in which some will be available later this year but most for next year.

With this method, even parsnips, carrots, turnip greens and lettuce can continue the cycle. But, with cucumbers, tomatoes, beans, squash, etc… the cutoff time would be about July 1st.

July 1st is also the cutoff date for trimming spring flowering shrubs as the flower buds are formed in the summer including rhododendrons, azaleas, magnolias, vibnrums, and pieris japonica.

Also important to know is that the last fertilizing for the acid-loving plant group is July 1st as they will have time to harden off for a cold winter.