Control Japanese beetle grubs before they cause major damage in your lawn!

Beetle grubs are a major cause of lawn damage each spring and fall in our area.  Grubs are the larvae stage of beetle cycles.  Adult beetles lay eggs from early to mid summer.  In a short time the eggs develop into grubworms which begin to feed on grass roots from mid summer until fall’s cooler soil temperatures force them to seek refuge at deeper soil depths. The grubs then hibernate until spring temperatures warm the soil.  They then resume feeding until they pupate or “hatch” into mature beetles anywhere from late May throug

The resulting damage (which may show until the summer or early in the spring)  appears as brown patches of dead turf that enlarge as the grubs continue to feed.  To check for grubs, pull at a section of dead turf.  It will roll back like a swatch of carpet.  Dig down at the edge of a damaged area and you will find the grubworms themselves; grayish, white grubs with gray or brown heads, approximately 1/2″ to 3/4″ long.  They will be curled into the shape of the letter “C’.  Immature grubs are milky gray in color and resemble elongated eggs.   They will be about 1/4” long. 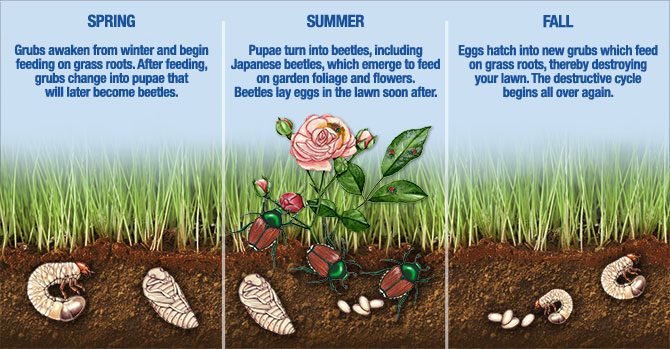 There are many variables in trying to achieve maximum grub control, including the type of grub, the timing and type of insecticide, the amount of thatch, and how well the insecticide is watered into the soil.  Remember that maximum control is usually 80% to 90%.  An otherwise healthy lawn can tolerate 4-6 grubs per square foot without showing grub damage.

It is essential that any insecticide you apply be watered in immediately and thoroughly after application.  Water each area treated for at least one hour.  One time to treat for grubs is mid-April to mid-May and the best time is July to mid-September.

Best results will occur if the control is applied after a period of rain and then watered in.  If there has not been rain prior to the applicaiton, it is advised to wait for a rain or irrigate your lawn WELL prior to application and again after application.

Both are relatively safe for humans and the environment.  he active ingredients in both are very low and are broken down by soil organisms.  Yet,  both effective grub controls when timely and properly applied.

Chlorantranilipole (Scott’s GrubEx) is best applied from July 1st-August 15th.  It is best to water the product in well shortly after application.

Dylox (Bayer’s 24 Hour Grub Killer) has less of a residual effect and is best applied from August 15th-September 15th and watered in thoroughly.  Dylox may be applied in early to mid April to kill resurfacing grubs, but since most of the grub damage is done in early fall, hitting grubs then is most effective. A good idea is to rotate these products by using one product one year and the other product the next year so that a resistant population of grubs cannot build up. 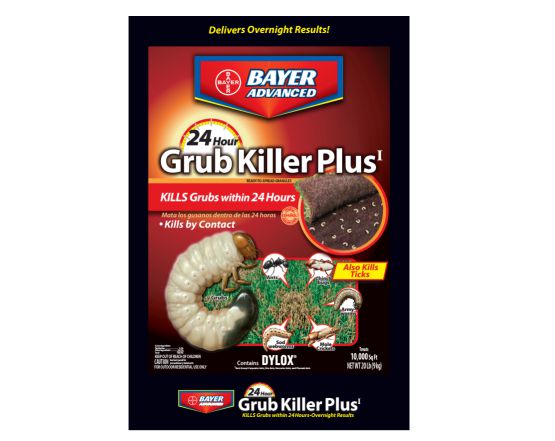 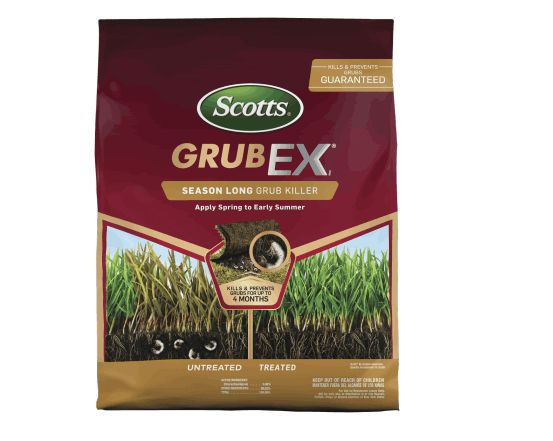